Adidas has partnered with AvatarLabs and Dick’s Sporting Goods to create an 8-bit “Snapchat” baseball title that unlocks access to purchase a pair of cleats in-game.

Called “Baseball’s Next Level,” the game is an old-school home run derby game that lets players swing away as some of Adidas’ MLB signed athletes. Playable characters include Aaron Judge (Yankees), Carlos Correa (Astros), Alex Bregman (Astros), Justin Turner (Dodgers) and Kiké Hernandez (Dodgers). According to Engadget, each of the athletes in the game have their own Adizero or Icon V cleats, which can be bought directly from the competition.

The Adidas partnership marks the first time “Snapchat” has sold real-life products inside a game. While the game is not considered a Snap Games title, such as the new “Subway Surfers” game from Sybo, Adidas has previously worked closely with “Snapchat” to create AR-based shopping experiences for its apparel and accessories. The AR experience lets users digitally try on the Adidas Ultraboost shoes directly in the “Snapchat” app.

How do you build the buzz? For a growing roster of entertainment brands and even corporate properties, it’s gotta be the shoes.

An increasing number of footwear suppliers and IP owners are finding common ground in limited-edition collaborations that play to fan bases and collectors alike, while also seeking to gain a broader audience with a brand story.

The story behind the brand is becoming more important as a growing array of collaborations clamor for attention.

For example, Nike’s recent collaboration with Netflix for “Stranger Things” was based on its Cortez style sneaker that is featured in the streaming series (which launched its third season on July 4) that was popular in the 1980s, the era in which the series is set. And mobile shopping app NTWRK featured a Wallabees effort involving brand owner Clarks and the rap group Wu Tang Clan to mark the last year’s 25th anniversary of the group’s release of “Enter the 36 Chambers” that mentioned the shoes in a song. And, in the past few months, there have been the pairings of Adidas and HBO’s “Game of Thrones”, Puma with Mattel’s Barbie and AMC Network’s “Walking Dead”, rapper Post Malone and Crocs, and Team SoloMid Fortnite player Ali “Myth” Kabbani and Vans.

“The best collaborations work for one of two reasons—there’s an obvious natural fit for both brands or an intriguing opposites attract scenario. They help you connect with consumers who follow a specific brand, retailer or designer, and in turn expand your appeal and perception,” says Jeremy Saul, managing director of global licensing and strategic partnerships at Skechers. “But with so many brands eager to pair up right now, you have to create an appealing style and break through the noise with the appropriate marketing and execution. Done right and with a relatable story, a collaboration can be a ‘wow’ moment for consumers and your brand.”

Those stories are typically short — running from a couple days to a few months in typical quantities of 5,000-10,000 pairs that quickly sell through. That compares to the 200,000-300,000 pairs typically manufactured for major collections, says NPD analyst Matt Powell. And while the collaborations are a small portion of a U.S. market that produces $42 billion in annual footwear sales at retail, they can have an outsized influence.

Their value is designed to run far beyond the revenue, generating impressions (viral and otherwise) on social media platforms. “I don’t think Netflix is motivated by the actual shoe sales, but the press and user-generated content around the promotion potentially propels subscriptions and viewership” of a new season of ‘Stranger Things,’” says Aaron Levant, CEO of NTWRK, a site 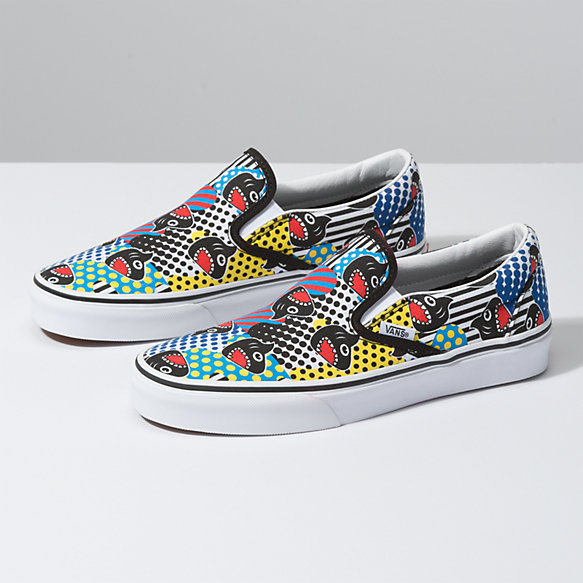 which specializes in combining exclusively developed entertainment content with extremely limited edition merchandise. By the same token, he says, a footwear brand such as Adidas gains by the association with “Game of Thrones,” which offers a marketing and communications platform to reach a desirable audience.

Similarly, Discovery Communications’ recent launch of Shark Week footwear with Vans served a “dual purpose,” says Discovery’s Carolann Dunn. While it caters to the show’s superfans, it also “drafts” off the general appeal of the Vans brand to perhaps extend it to one who also is a “collector looking for something new.”

For footwear specialty chains, the collaborations are a device to attract younger consumers who might be more apt to spend their money on a new gaming console or an experience than a pair of sneakers.

The boutique-like, limited edition pop-culture-driven strategy adopted by some retailers is further fed by unexpected product previews. Fans of rapper Travis Scott were quick to spot him wearing “Cactus Jack” Air Jordan 6s when he hit the stage for the NFL Super Bowl halftime show in February, well in advance of their expected release this summer.

“You have to incorporate the interests of the consumer into the footwear in order engage them,” says a buyer for a major footwear chain. “We have to go beyond the traditional methods of releasing [new lines] in stores and expecting consumers to walk in and buy them.” 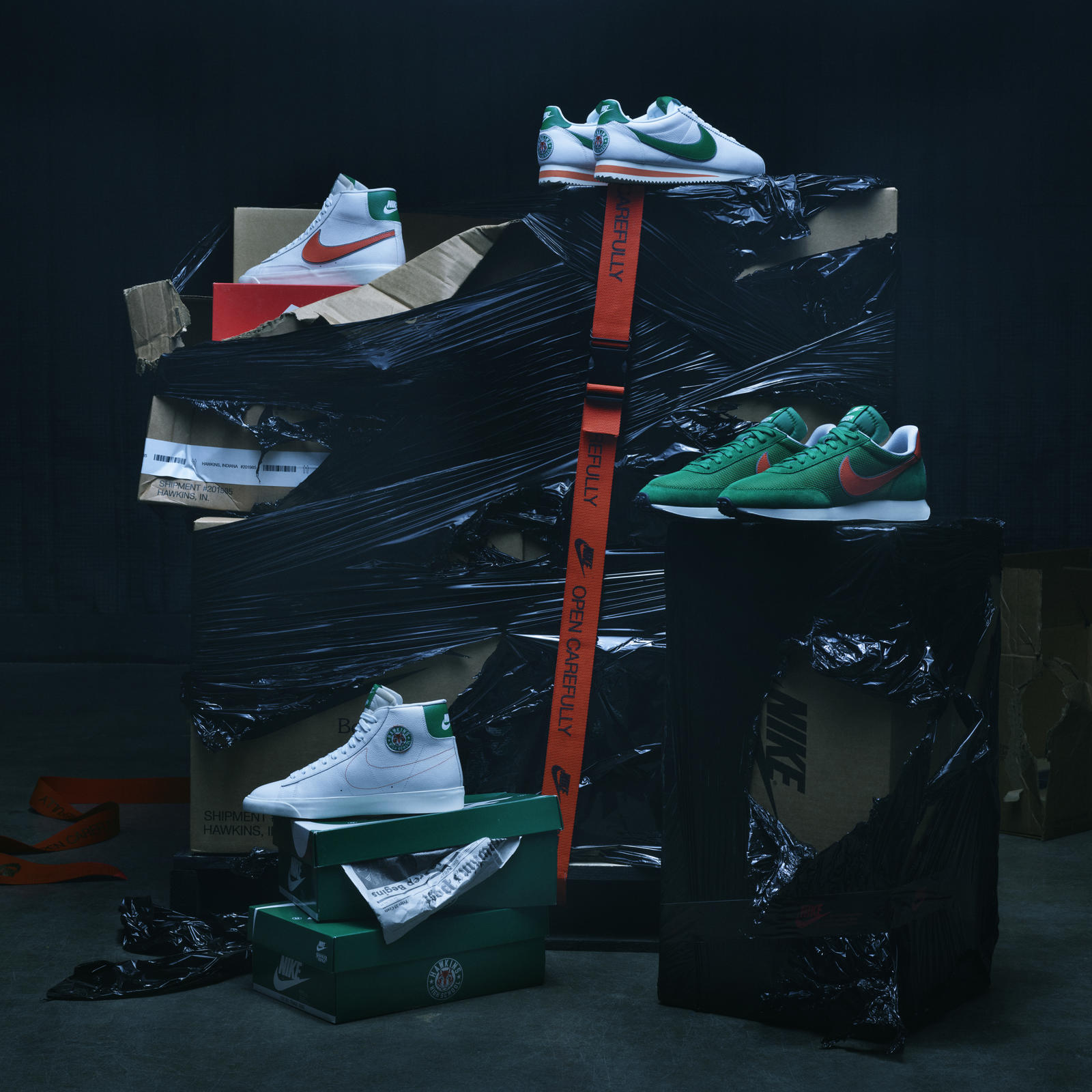 With the rise of athleisure, athletic footwear is becoming more about fashion and less about function. That market shift is coupled with shoe manufacturers increasingly using existing models from within their core lines for collaborations, which can cut production time on a limited edition to 3-6 months from the 12-18 months needed for an entirely new product.

“The aesthetics of a shoe are more important now than the actual functions of it,” says the footwear chain buyer. “In years past the market was performance driven. It is a different audience now and you get more credit for visual components. While the technical aspect is still very important, we just haven’t seen the innovation to the point where it is something that can stand on its own.” 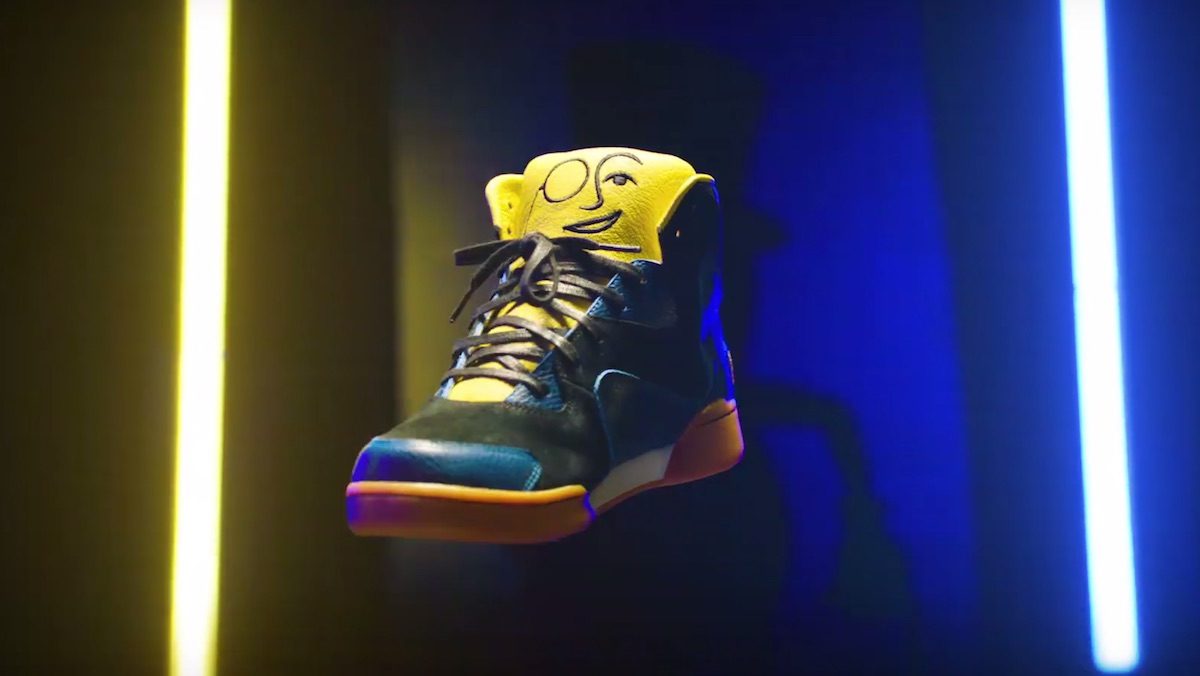 NPD’s Powell agrees, citing a “lull” in advances in performance footwear technology. “People aren’t buying true running or basketball shoes to wear in the street,” says Powell. “What is in vogue right now is footwear that is athletically inspired, but not necessarily intended for sport. Most collaborations fall into that bucket.”

Many of the collaborations are at retail prices of $100 or more, owing largely to higher manufacturing costs associated with shorter production runs. For example, Nike’s standard Cortez sneaker sells for $65. A “Stranger Things” version retails for $120 on Nike.com, the only place where it is available. Adidas’ most recent release of Game of Thrones sneakers was priced at $180 when it launched in late May.

But those retail prices pale alongside what limited edition sneakers can fetch on re-sale web sites such as StockX and Stadium Goods.

For example, on StockX — an exchange for buyers and sellers — Nike’s Hawkins High (the fictional high school in Stranger Things) basketball shoes were priced at $239, up from the $120 that Nike was charging on its own web site. And the Nike Classic Cortez was at $180, up from $120. On Stadium Goods, Adidas Ultraboost Game of Thrones sneakers were at $350, while on Footlocker.com they were at $180.

The resale market has kept some limited edition collaborations from expanding into a more widely distributed lines at lower prices, says Powell.

“I think brands are missing an opportunity for more broadly commercializing these products,” says Powell. “But they feel they don’t want to hurt the value and the heat the resale market brings, because if a consumer knows that a shoe is going to come in a [lower priced] commercial version, it is going to hurt the value of that market.”

17-piece collection will be worn by some of the biggest names at this summer’s tournament.

Fashion designer Stella McCartney has once again joined forces with adidas, this time to launch a tennis collection.

The range – which consists of 17 pieces – will be worn by some of the big names taking part in this summer’s Wimbledon tournament including Angelique Kerber (pictured), Garbiñe Muguruza and Stefanos Tsitsipas, reported fashion business title Fashion United.

The collection includes a court dress and court zip tee for women, plus a tailored FreeLift construction for men.

The pieces were created using a range of methods and sustainable materials including dope dye technology – this creates less water waste by adding colour directly into the material mix at the initial stage of production – recycled polyester and Parley Ocean plastic, which is a material created from upcycled plastic waste intercepted from beaches and coastal communities before being made into yarn.

Adidas has signed a partnership with Italian company Marcolin Group to bring a new line of branded eyewear under The Originals collection.

The Marcolin Group has taken responsibility to design, develop, manufacture, market and sell eyewear products under the Adidas Badge of Sport and Originals labels until 2024.

“Today’s sportswear embraces and influences the entire fashion and accessory industry, and we are very excited to begin collaborating with a legendary brand like Adidas,” says Massimo Renon, chief executive officer, Marcolin Group. “This partnership represents a further milestone in our strategic view. We are adding an iconic brand to our portfolio, complementing our presence in the eyewear sporting goods industry.”

The new line of Adidas eyewear will take its inspiration from street culture, while staying loyal to the brand’s core values of creativity and authenticity.

The star will be a creative partner for the brand and develop new signature footwear and apparel, as well as re-launching her Ivy Park brand with adidas.

“This is the partnership of a lifetime for me,” said Beyoncé in a statement. “adidas has had tremendous success in pushing creative boundaries. We share a philosophy that puts creativity, growth and social responsibility at the forefront of business.

“I look forward to re-launching and expanding Ivy Park on a truly global scale with a proven, dynamic leader.”

Eric Liedtke, executive board member, global brands at adidas, added: “As the creator sport brand, adidas challenges the status quo and pushes the limits of creativity through its open source approach.

“Beyoncé is an iconic creator but also a proven business leader, and together, we have the ability to inspire change and empower the next generation of creators.”

Adidas Skateboarding and MTV have reunited to deliver a second capsule collection inspired by animated series “Beavis and Butt-head” this spring.

The new collection pays homage to ‘90s skateboarding and the pop culture surrounding it.